Skip to content
Half Cut Solar Panel: All You Need To Know

Looking to attain more power output in limited space? Here we would like to introduce half cut solar panel to you. They are the newest upgrade in the solar industry, making efficiency greater than ever before. The problems like hot spots, shades and reduced voltage are no more. But how did it become possible? It’s really a mystery to some people, but it’s not rocket science. This article has included all details of a half cut solar panel, from basic to technical to advanced. So, let’s reveal!

What Is A Half Cut Solar Panel?

They are traditional mono or polycrystalline cells just cut in half using laser cutters. But what’s the science in it? How the power output increases just by cutting the solar cells in half? Following are the major reasons for the boost in power output.

One of the significant power losses in converting sunlight to electricity is resistive losses. They are due to transferring current from solar panel wires to the home cables. The solar cells transfer current by thin metal wires where the current loses some power due to resistance.

However, when the cell is cut in half, the current produced in each cell is halved. It results in lower current flowing and thus lower resistive losses. As a result, the power output increases and is greater compared to the standard solar modules. Generally, the half cut solar cells provide power output between 5W – 8W per module. However, it’s totally dependent on the design and cell type.

The solar panel half cut module offers more shade resistance than the full module cells. It’s not due to half-cut design but the difference in the wiring method. The traditional solar panels have series wiring and are thus badly affected by shade. In a series wiring, the entire row will stop producing power if only one cell is in shadow. In general, the solar panels have three different rows connected together. So, if one cell is in the shades, it would cut almost one-third of that panel’s energy production. 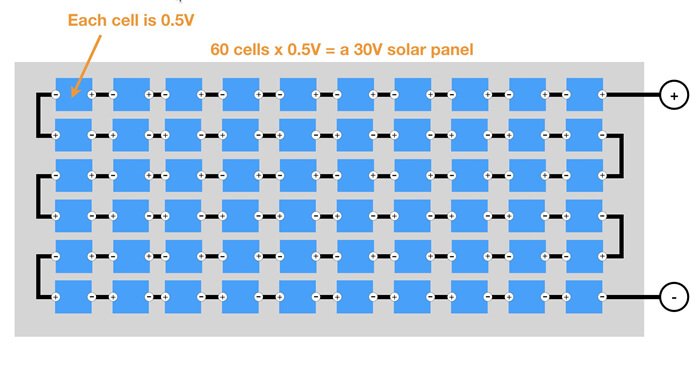 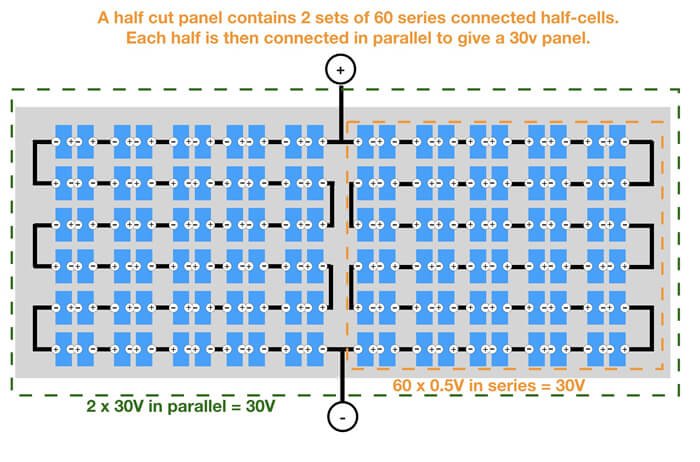 In the case of a full module, the hot spots affect a larger area since the number of cells is less. However, if it is a half cut solar panel, it means less heat because a half cell is shaded compared to the full solar module. In simple words, the half cut solar cells dump half heat compared to the full solar panel. So, it means less damage and more life. 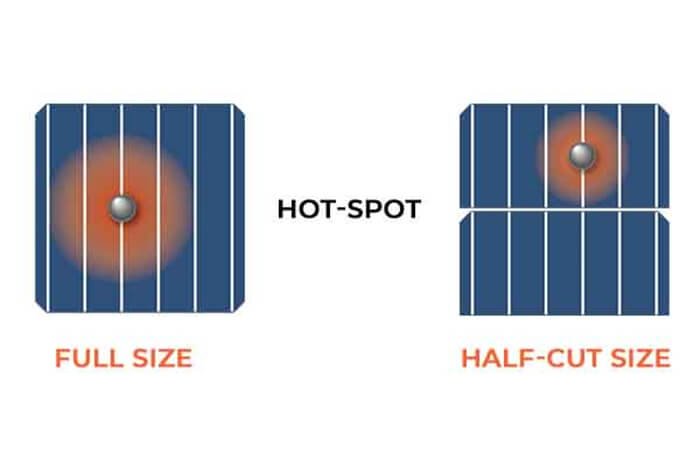 How Does Half Cut Solar Panel Work?

The working principle of half cut solar cell technology is super simple. It’s just a matter of reducing the cell size to have room for more cells. So, the main purpose of splitting the solar panel is to increase the number of cells. With more cells, more energy production is possible – even when half of them are in the shade.

Let’s have a detailed understanding.

Standard mono solar cells generally have 60 – 72 cells. When they are cut in half, the cell number doubles. Now, they have increased to 120 – 144 cells, which means higher energy production. They are usually designed with PERC technology, known for providing higher efficiency.

The cells are split in half with a laser – high precision and delicate cut. Cutting the cells in half means cutting the current in half. So, the resistive losses due to current transfer reduce, resulting in more power output. On top of that, cutting the solar panel in half results in two separate portions; top and bottom. Two separate parts mean that power production won’t stop if one portion is entirely in the shade.

Increasing the power output is all about wiring. In a traditional solar cell, a complete row won’t produce power if only one cell is in the shade.

Consider the above panel. It has three rows connected to the bypass diode; 1, 2, and 3. Suppose if any one of the cells in row 1 is in shades, the complete row 1 won’t produce power.

Now let’s compare the half cut solar panels. They have two portions and have a greater number of cells with separate wiring. So, a shade on one cell cuts only one-sixth of the panel’s power – not one-third. 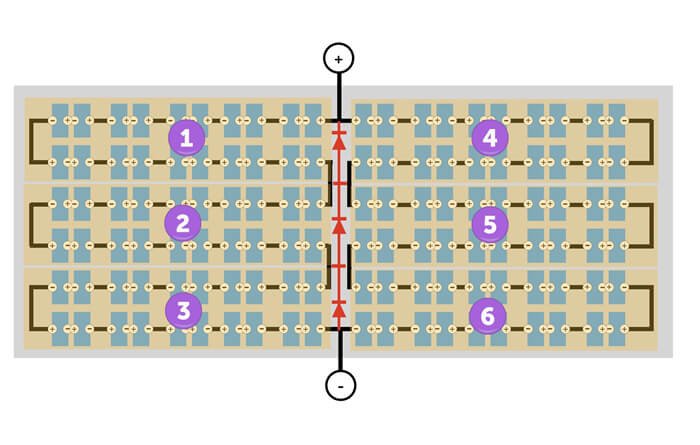 When cut in half, the row number doubles. Now, it has six rows instead of three. In this case, one shaded cell in row 1 will cut the power of the complete row 1. However, the remaining five rows will still produce energy. Lesser power cut means more energy and more power output.

What Are The Advantages/Benefits Of A Half Cut Solar Panel?

Generally, the half cut cells are manufactured using PERC technology. So, we will explain how you can benefit from mono PERC half cut solar panels.

The half cut solar panel efficiency is higher than standard solar modules. They provide higher power output due to following reasons:

Besides higher output, the half-cut cells offer longer service life and thus are more reliable. They are highly crack-resistant, thanks to their compact structure. For these reasons, most farms and homes prefer half cut solar modules since they provide a faster return on investment. Moreover, they easily fit in compact places no matter the sunlight’s intensity.

The mono half cut solar panels have more cell numbers and lesser resistance. In shades, the current face less resistance, all thanks to a large number of rows. Therefore, the power output is higher compared to conventional full cell solar panels.

The half cut solar modules have higher Cell-to-Module (CTM) power, which boosts power output. Conventional full cell solar panels have 94.8% CTM power. On the other hand, the half cut solar panels provide 99.4%, neglecting the laser-cut losses. Considering losses, it still provides 98.4% CTM power which is higher than traditional solar panels. However, their conversion efficiency is entirely dependent on the type of solar cell technology.

Half cut solar modules are an alteration in the PV modules manufacturing process using traditional c-Si technology for solar cells. As a result, they can be manufactured using PERC or bifacial technologies. Using these technologies, the half cut solar panels provide higher power output, fewer losses, and multiple other benefits.

What Are The Disadvantages Of Half Cut Solar Panels?

No doubt, the half cut solar cells are quite beneficial, but there are always some cons. So, make sure you know them before jumping to buy them.

Manufacturing half-cut cells require more investment compared to full-cell solar panels. The half cut solar cells manufacturers need high-end cutting lasers and stringers to cleave solar cells. As per the studies, they cost 0.6 – 1.2% more than full-cell modules. However, their cost per watt decreases by 0.8 – 1%, thanks to the power increase.

Cutting cell in half means twice the number of soldered connections, which means more risk of bad contacts. In addition to that, halving the cells increases the chances of producing defective cells, which is a drawback for manufacturers and could impact its cost. However, a mono half cut solar panel manufacturer with superior quality control won’t have such problems.

What Is The Difference Between Half Cell And Full Cell Solar Panels?

In order to fully understand the scope of half cut solar panels, it’s crucial to compare both full cell and halved cell technologies. In this section, we compare the differences in voltage, current, number of cells, and much more.

Traditional solar panels generate multiple losses and low CTM power. However, the mono PERC half cut panels are an improvement to the older technology. Therefore, they produce greater CTM power, higher tolerance, and are more crack-resistant. In the same way, they have lesser losses and resistance to the current.

Half cut solar panels decrease electrical losses by 75% and boost CTM power by 3.6% in comparison to standard solar modules. Furthermore, the operating temperature reduces since the current per cell is less. As a result, it decreases hot spots by 20ºC, providing extra durability and reliability. The number of cells is quite apparent in both. If the full cell solar module has 60 cells, then the half cut solar panel will have 120 cells.

The main advantage of halved mono PERC solar panels is higher power output. Compared to full solar cells, they provide 2 – 4% more power. A half-cut solar panel’s primary drawback is its slightly higher price and reduced luxurious look. Considering the price, it’s not significantly elevated and will probably provide you with a faster return on investment. Looking at the aesthetics, you won’t notice the half-cut cells in a black solar panel. So, it’s really not a problem worth considering. 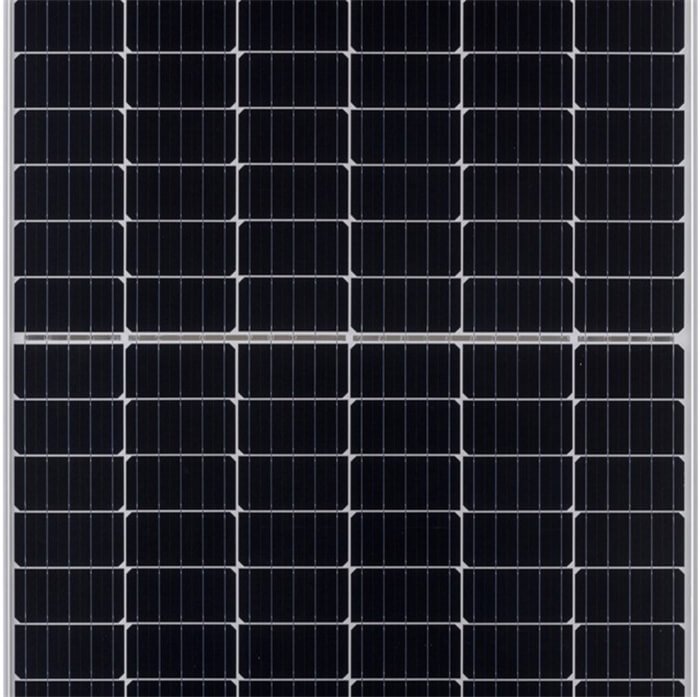 Is Half Cut Solar Panel Worth It?

The half cut mono solar panels are the newest upgrade in the solar industry to attain higher efficiency for PV cells. Considering its advantages, there isn’t a reason to say no to higher power output, except for one; its price. Yes, the half cut solar panels will cost you 0.6 – 1.2% more than full-cell modules, but don’t forget its 2 – 4% higher power output. It can provide a quicker return on investment compared to the old c-Si PV modules.

On top of higher output, they can easily fit in your homes, farms, and industries because of their compact design. Performance-wise, they are more reliable and durable due to multiple junction boxes. Most importantly, they have higher shade tolerance. By adding more substrings, the half cut solar cell manufacturers reduced the power losses.

While you may worry about its strength, the solar cells are smaller but equally strong as full cells. They have the same level of protecting glasses and will be equally robust as standard solar panels. So, without a doubt, the half cut mono PERC is the best investment. It’s a saying, “why pay for solar panels on half power when you can get the half solar panel on full power” Alright, alright, I just made it up!

Where To Buy Half Cut Solar Panels?

There are many half cut solar panels suppliers and wholesalers in the market. Quality of solar panels are not same, some are high quality, some are not. Do you think can you distinguish between high quality and low quality half cut solar modules by your eyes? I think the answer is NO for most of cases. Because normally only by professional testing tool (like EL testing), you can know about how is the exact real quality of solar panels.

Besides, purchasing solar panels from reliable supplier is a good choice for you to avoid risks. Vokek is professional China solar manufacturer with over 16 years of experience. If you are going to import grade A quality half cut solar panels for on grid solar system and off grid solar systems from china half cut solar modules supplier, then Vokek is your best Choice for your solar business.

Compared with full solar panels, half cut solar panels have additional benefits. Not just in durability and reliability but also in providing more power and more return on investment. So, if you are thinking of upgrading your solar panels, it’s best you go for the latest half cut mono PERC technology.

If you are living in a cloudy region, shades are always annoying. It’s not a direct power cut that annoys; it’s the lower voltage, which is dangerous to the appliances. And don’t forget the hot spots; they are totally responsible for destroying cells. You have one solution to all these problems: a half cut solar panel.