Skip to content
How To Choose Best Off Grid Solar Inverter

How To Choose Best Off Grid Solar Inverter 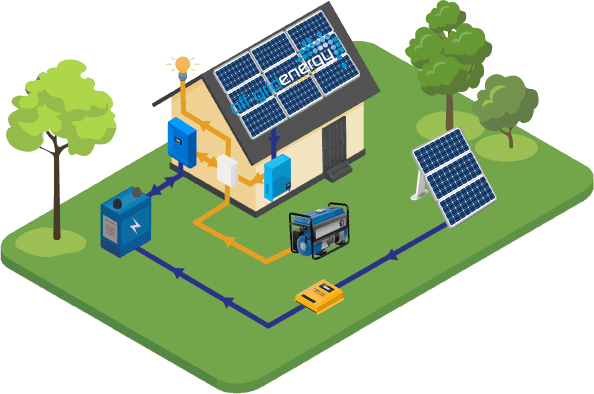 Looking for an off grid inverter for homes can be pretty rough, especially if you don’t know what you’re looking for and aren’t privy to the technical jargon. Be sure to encounter words like KW rating, size of inverter, input voltage range, the capacity of the inverter needed power output, etc.

The truth is, choosing the right off grid solar inverters can be pretty easy; however, there are a few steps and ideas that you’ll have to understand if you are to select the right inverter for your home or business. Solar Inverters are your solar system’s brainpower. They manage the power flow and control two types of electrical power: AC and DC.

DC: DC power (Direct Current) is produced by your solar panels and stored in batteries. However, you can’t use this type of power to power devices, which is why you need an off grid solar power inverter to convert DC to AC.

AC: AC power (Alternating Current) can be used to power various devices in your home, i.e., your fridge, television, lighting, and other devices in your home. AC power can be transported easily and loses less energy at high voltages, making it perfect for taking care of your electrical needs.

How Does An Off Grid Solar Inverter Work?

Off grid solar inverter’s working principle involves using battery banks to store energy collected from the sun. The off grid solar system inverts the power fed to your home’s battery bank from solar panels. It works like a battery grid and converts the electricity (that’s in DC form) to AC, that’s then used to power your home appliances.

If you are curious, you should be aware that you don’t need a large solar system (unless you have lots of power needs), and the inverter does not deplete the battery bank unless your wiring is not done correctly. The inverter battery bank is kept constantly powered by the solar panels plus an all in one solar charger inverter in the summer and a generator (if needed) in the winter. However, you’ll need to ensure that you use the best solar inverter off grid.

Off grid systems are a bit complicated compared to on grid systems because of additional components such as the charge controller, battery monitor, plus DC and AC circuit breakers. These components make it more complicated to wire and install off grid solar inverters when combined.

Purchasing an off grid solar inverter can also get more complicated because of the number of associated accessories needed. They include a battery monitor, remote controls, surge suppressors, breakers and enclosures, etc. Choosing the correct components can be a little confusing. However, this article aims to provide you with more information to tackle this issue. Read on and find out more.

What Types Of Off Grid Inverters Are There?

Some of these devices include:

These types of inverters ensure that connected appliances and machines run as they should and at their full functionality and capacity. That said, what about modified sine wave inverters?

While most equipment can work with modified sine wave inverters, few exceptions exist. Some of the devices (if connected) will get damaged or run at reduced power, and others won’t run completely. You’ll need to check with your device manufacturers’ for the specifics.

Devices you wouldn’t want to run with modified sine waveform inverters are:

Modified sine wave off grid inverters are the most common forms of inverters in the market and are more likely to provide you with a more cost-effective option compared to pure sine wave inverters. However, it would be great if you did your research and determined whether they are the best option for you.

What Is The Difference Between Grid Tie Inverter And Off Grid Inverter?

Grid tie inverters are used to convert DC into AC that can be injected into the electrical power grid, which is usually 240V RMS at 50Hz or 120V RMS at 60Hz. They are used between electrical generators: hydroelectric, solar panels, the grid and wind turbines.

Off grid solar systems that are designed to work on their own without synchronizing with the grid. They connect and power the property by inverting DC power to AC and supplying it with the connected appliances. This is a 100% self-sustained energy system.

As mentioned before, off grid inverters are a bit complicated compared to on grid inverters. They have various accessories needed for proper functioning, such as breakers and enclosures, remotes, etc. the main difference between these two types of inverters is that one of them is connected to the grid while the other isn’t.

With so many individuals looking for more sustainable forms of energy to power their homes, they are faced with either of two choices, especially when it comes to solar energy. They could either choose to stay connected to the grid or stand-alone.

While standing alone can be intimidating, here are a few advantages that could help you change your mind:

An off grid solar system is more convenient since they provide your home with power throughout, helping you worry less about power outages and increased energy demands.

Off grid solar power systems help prevent reliance on fossil fuels and other sources of energy that harm the environment. They also help eliminate the amount of money you’d have otherwise paid for grid power supplied to your home.

While initial installation costs may be high, you can comfort yourself by the fact that the system has low maintenance costs, and you won’t be paying for the electricity received. Plus, you’d be living cleaner and greener.

As mentioned before, off grid solar power systems are more sustainable, renewable, and environmentally friendly compared to fossil fuels, nuclear, and hydroelectric power plants. It is beneficial since it minimizes damage to the environment.

The example above is an estimation, and you’ll have to make some calculations to determine your power needs and how many batteries you’ll need to store the power produced. Take care not to buy more batteries than you need.

For instance, if your battery is full, the inverter will convert the energy produced from DC to AC and feed directly into the load. You could then use the power stored in the batteries at night when there is no solar energy. 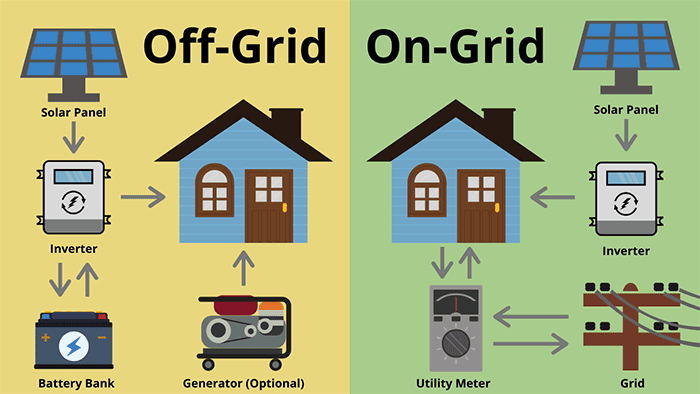 Whichever system is cheaper between on grid and off grid solar power systems depends on an individual’s perspective. For instance, off grid power systems require more equipment during installation (including an off grid inverter, solar charge controllers, batteries, etc) than on grid solar systems.

However, on grid solar systems require you to pay for the cost of electricity. In addition, they need you to pay professionals to connect you to the grid. However, generally speaking, you could be better off paying high costs for equipment for a one-time deal of clean, sustainable, and reliable energy.

How To Choose The Best Off Grid Solar Inverter?

You’ll need to look for various factors when choosing a suitable inverter. These include:

Where To Find Best Off Grid Solar Inverter Manufacturer/Supplier From China?

If you are going to purchase good quality off grid solar inverter or other solar products(like solar charge controllers/solar panels/ solar pump inverters/ solar lights) from China, welcome to contact Vokek, you will get strong supports and expand more your solar business market share easily.